After two dramatic weeks of filming in France, it's a wrap for Dakota Johnson—at least for the time being.

The actress arrived stateside at Los Angeles International Airport in California on Thursday, following weeks spent abroad working on the final two installments in the Fifty Shades of Grey franchise. Making her way through the crowded airport, Johnson, 26, looked like the definition of business-casual in a sleek oversize black blazer and a striped button-down shirt knotted at her waist.

Johnson and her costar Jamie Dornan spent the previous few weeks filming (and hitting the beach) in the South of France, before the Bastille Day attack halted production. In the wake of the attack, producer Dana Brunetti assured fans of the cast's safety: "Everyone has been accounted for and is safe and sound." 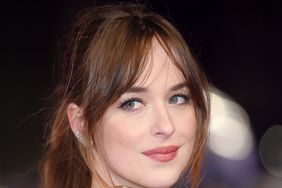