If you tuned in for the series premiere of The Comedians last week, then you already know that the brand new FX comedy brings some serious laughs. And really, since it stars Billy Crystal and Josh Gad, how could it not? The show’s second episode airs tonight, and the hilarious moments will keep on coming, according to star Megan Ferguson. “It’s the kind of awkward humor that makes your skin crawl,” she tells InStyle. “There are so many layers of absurdity and just the day-to-day awkwardness of reality.”

Things do get really real on the faux-documentary style series, which follows the filming of a fictional sketch show starring Crystal and Gad as, well, themselves. “It’s very meta, because they're filming the behind-the-scenes world of their fake FX show for our real FX show,” says Ferguson, whose character Esme is a production assistant on the show-within-a-show. “There’s a lot of blurred lines, because it’s so realistic.”

Even the cast gets thrown off as to what’s legit and what’s staged—especially when it comes to the authentic-looking props. “There’s one craft services table for the set and one for real life, and I was constantly at the wrong one!” Ferguson reveals. “I would spend entire scenes at the stunt craft table, eating and looking at my phone, and then they’d say, ‘That was great!’ But I didn’t even know that I was in the scene.”

Trying or not, Ferguson pulls off her character’s indifferent vibe like a pro. “Esme’s not really clued into what her job requirements are, and she’s definitely not psyched about being there,” Ferguson says. “She’s the lowest on the totem pole of the Billy and Josh show, and she's very unaffected by the fictional TV world that’s revolving around their egos.”

Despite her lack of interest, Esme's not one to hide her feelings. “She just doesn’t have a filter,” says Ferguson. Really, the entire show is a #nofilter zone—especially when it comes to filming. “We're all given full scripts, but then there’s encouraged playfulness, too,” says Ferguson. “At the end of a scene, they let the cameras run so that people can try improv. It’s very hard to keep a straight face!” Now that, we can believe.

Tune into The Comedians tonight at 10 p.m. ET on FX. 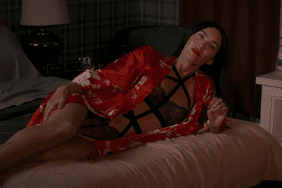