How Intense Is the New True Detective? Colin Farrell Says: "I'd Give It an 8"

True Detective returns for its second season this Sunday, June 21 on HBO. The first season of the crime series brought together Matthew McConaughey, Woody Harrelson, and Michelle Monaghan for an explosive drama that earned dozens of accolades, not only for its cast but also for its director, Cary Joji Fukunaga, and writer, Nic Pizzolato. The same creative team is coming back for round two, but with another group of star players, including Colin Farrell, Vince Vaughn, and Rachel McAdams.

Just a little while ago, InStyle sat down with Farrell to discuss his new campaign fronting Dolce & Gabbana’s Intenso cologne ($69, sephora.com), where he divulged that one of the most “intenso” things in his life at the moment was filming True Detective. “I haven't done TV in years, and it'll be the same thing as doing film,” he told us, “but the head plays tricks on you, and you think, 'Am I giving up (on movies) now?' and that nonsense.”

What convinced the 39-year-old to take the part was the writing. “It’s just extraordinary,” Farrell says. “I loved the first season. What it’s gotten to is, I’m just a man with a script again. And genuinely -- I know it sounds so country of me -- but all of the episodes have incredible writing.”

Colin Farrell Dishes on Cologne, Shaving, and Liz Taylor
Was this page helpful?
Thanks for your feedback!
Tell us why!
Related Articles 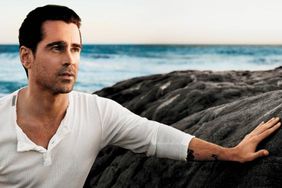