While a ton of stars flocked to Las Vegas for Billboard Music Awards festivities this weekend, Molly Sims, Cindy Crawford, and more stuck around Los Angeles for a charitable cause. As the sun set on the iconic Green Acres estate in Beverly Hills Calif., on Saturday, the supermodel duo, Chelsea Handler, Jane Fonda, and industry insiders headed inside a star-studded bash on the grounds to celebrate philanthropist and real estate developer Mike Meldman.

The Discovery Land Company CEO received The Heart Foundation’s Steven S. Cohen Humanitarian Award during the event for his work to improve the lives of children around the world. “I really think you change the world one child at a time,” Meldman told InStyle. “We really see the impacts and the change in the children that we help. For the last 20 years, they’ve grown up and [have] gone from literally having no families to having families and being productive grown ups. So, it’s nice when you get to see the actual person be saved.” Meldman’s Discovery Land Company provides support to nonprofit organizations serving shelter and foster children and families in communities near its projects.

Sims, who hosted the event with her husband Scott Stuber, sang Meldman’s praises, telling us she was not only excited to celebrate him, but also to help raise funds for the Heart Foundation, which raises awareness about heart disease. “Mike Meldman is being honored tonight, so we wanted to be here,” the model turned actress, who stunned in a black Dolce and Gabbana top, sheer Maje skirt and Stuart Weitzman heels, told us. “My husband and I are hosting. I’ve had heart issues in my family for almost 25 years. It’s the number one cause [of death] in women. I just wanted to show up and see if there’s anything we can do and hopefully by being there we can raise a lot of money.”

Crawford, who attended the event with her husband Rande Gerber, echoed Sims’s sentiments about Meldman, saying, “Mike does so much for other people that it actually feels like an honor to be here tonight for him, because he’s usually setting the stage much.” She added, “Kind of what they do in their careers is making sure everyone else has a good time, and tonight’s about us giving back.” (Gerber and George Clooney’s Casamigo Tequila sponsored the event, where guests enjoyed a performance by Adam Levine.)

The Meaningful Beauty businesswoman rocked McGuire jeans, a leather jacket, a black Z Supply V-neck tee and a black and white scarf to the bash and said her outfit was a reflection of the vibe of the party. “The great thing about this event was that it wasn’t about [dressing up],” she told InStyle. “All of Mike’s places, they’re like the ultimate in luxury, but, part of that is like a very understated, casual thing ... Mike really wanted that spirit of what he’s about and what Discovery’s about to be part of this event, and that’s why it’s not a typical black tie dinner where we’re freezing in gowns, thank god.”

Crawford also shared a personal awww moment as she enjoyed date night with husband Gerber. They have an anniversary around the corner and their love is obviously going strong. Crawford dished on the sweetest thing Gerber has done: "When we were dating, he knew that I always wanted a piano. I told him, like one time I mentioned it. One Christmas morning, I woke up to like, it sounded like Christmas music on the radio or whatever. And I started going downstairs, and there was a piano with our friend playing Christmas carols on it, at like seven in the morning. He managed to get a piano in the house, and then someone in like, you must have let him in at like six in the morning. So that was very nice." 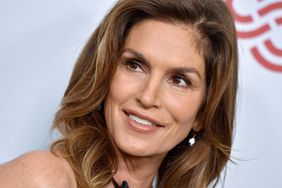