Chrissy Teigen's Ponytail Is Nothing Like Your Go-To Gym Style

A low ponytail is usually a no-brainer for gym sessions and bodega runs, but leave it to Chrissy Teigen to turn a casual style that can be done in a matter of five seconds flat into a bonafide red carpet hair moment. The pony that Teigen wore to the Hamilton Behind the Camera Awards in Los Angeles on Sunday is not only undeniably cool, it’s super easy to do.

From the front, it looks like your average sleek pony, but from the back you’ll see that the style has a twist—literally. After blow-drying Teigen’s hair straight and parting it in the center using a Maison Peason brush ($150; nordstrom.com), celebrity hairstylist Laura Polko collected it into a low pony and spritzed hairspray along the hairline as she worked.

Once Polko secured the pony with a black Scunci Hair Elastic ($3/14; target.com), she knotted a long piece of elastic cord that she picked up from a fabric store onto another Scunci hair tie and knotted it to secure it. Next, she wrapped it around the existing elastic holding the pony together and then wrapped the long cord tightly around the tail in whichever order she wanted. When Polko reached the end, she employed the same trick of tying an elastic cord to a hair tie, and used it to create the loop at the bottom and secure the ends.

To add another edgy—but completely practical—element to the style, Polko crisscrossed about eight back Scunci Bobby Pins ($4/48; walmart.com) on each side behind Chrissy’s ears to pinback her long bangs. Although the side view of the pony is breathtaking, take a look at Polko’s Instagram snap of the style from behind and give it the slow clap it deserves. 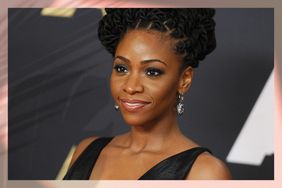 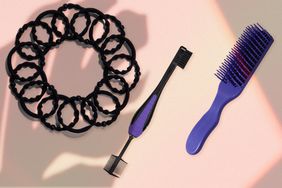 If You Have Natural Hair, You Need To Add These 10 Tools To Your Routine 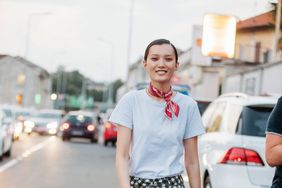