Chrissy Teigen Crowdsourced Ripe Bananas from Twitter So She Could Bake

On Tuesday, Chrissy Teigen took to Twitter with a dilemma: She wanted to bake banana bread, but didn’t have any overripe bananas. Since grocery stores don’t usually sell brown bananas on their shelves, the Queen of Twitter took to social media to ask her fans an odd favor. For six ripe bananas, she would trade a goody bag of personal items (and ultimately an unspoken opportunity to be featured on her Twitter account).

“If you have 6 BROWN bananas in the L.A. area, I will send my assistant to your home with a signed cookbook, John’s underwear, and a Becca palette,” she wrote. “SERIOUS INQUIRIES ONLY. Please send me a photo of [you] holding the bananas, giving the peace sign.”

Of course, the responses flooded in, but most banana owners only had two or three, not six. At first, Teigen thought about picking up fruit from multiple different houses, but then she found one fan with five spotted bananas and decided that was good enough.

“Banana submissions are now closed. Thank you guys so much. I will send the runner-ups some banana bread once done,” Teigen wrote.

It turns out her “assistant” was none other than her mom, Vilailuck, who happily made the trade and quickly returned home.

This isn’t the first time Teigen has made banana bread this month: On Sept. 17, she asked her fans if she could bring yellow bananas to the Thai temple and take brown bananas in return from the Buddha house offerings. Luckily, her mom said the move was kosher and Teigen got to make some delicious-looking banana bread, as evidenced by Snapchat.

Here’s to hoping a banana bread recipe makes its way into her next cookbook. 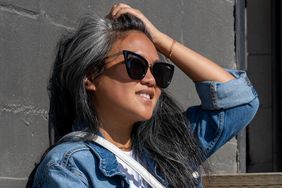