Yesterday we traveled to Long Island for the Hamptons International Film Festival where Hilary Swank attended the premiere of the new film The Homesman at the legendary Guild Hall. "It's great when movies are given time to be talked about. To see movies before they come out wide in the theaters is always really fun, as an audience member myself," she tells InStyle.

Swank, who never fails to thrill when she steps onto a red carpet, wore a tricolored Delpozo dress (above) and Casadei shoes to the event and provided us with some insight into how she makes her impressive fashion choices. "I really appreciate clothing as an art form and a way of expressing yourself. I sort of think about: Where are we? What feels right for the time of day?"

"I really appreciate clothing as an art form and a way of expressing yourself.—@HilarySwank"

After a big red carpet, Swank tells us she takes off her shoes immediately. Once the shoes are off, the actress indulges. "My favorite after-the-red-carpet food is Indian because it's filling and comforting and I sleep the best on it."

—With reporting by Violet Gaynor 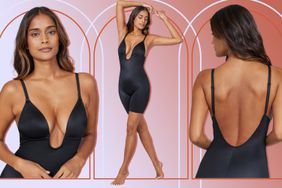