Charlize Theron Cut Her Hair Because of Megan Rapinoe

Everyone wants to be Megan.

We were all thinking about it, but Charlize Theron actually went and did it.

During her acceptance speech at the Glamour Women of the Year Awards, where she took home a trophy for being The Rebel of 2019, she told the audience that her recent chop was inspired by FIFA Women's World Cup superstar Megan Rapinoe. Her skills on the pitch may have stolen the spotlight in France this past summer, but everyone was just as enamored by her pink hair. It was enough, obviously, for Theron to go all-in at the salon.

"The women in this room tonight are putting themselves on the frontlines of the empathy battle, through storytelling, creating opportunities for those who need it most, or just unabashedly being yourself and telling other women, 'We don’t have to apologize for who we are or what we are,'" she said. "And I'm looking at you, Megan. This is all you."

Charlize Theron Ditched Her Bowl Cut for Another Short Hairstyle

Theron looked right at Rapinoe and smiled as she spoke, so there was no doubt which Megan she was referring to — let's not forget that Theron plays Megyn Kelly in Bombshell. Theron's sleek style came courtesy of Jenny Cho, who shared a close-up look at the coif on her Instagram feed. (Rapinoe's is the work of her go-to stylist, Riawna Capri.)

Megyn Kelly Reacted to Charlize Theron Playing Her in Bombshell

Rapinoe was on hand to take home the Glamour 2019 Woman of the Year Award for her advocacy as well as her action with the United States women's national soccer team. 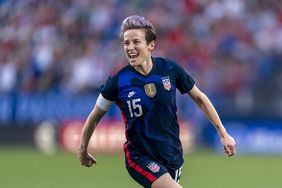 Megan Rapinoe's Pink Hair Is Back