It's been a big year so far for Jack Reacher actress Rosamund Pike! Following in the footsteps of Emily Mortimer, Tom Cruise's co-star is the newest face for British brand (and Kate Middleton favorite) L.K. Bennett. The star looks casual and cool in the first image from the brand's Spring/Summer 2013 campaign, wearing a crisp white button-up and a black leather skirt. Meanwhile,Stephanie Seymour has a brand new modeling gig! Jason Wu just put her in the ad campaigns for his Spring 2013 collection, and Seymour looks as sultry as ever in lots of black, mesh, and lace. The premiere image was shot by fashion veterans Inez van Lamsweerde and Vinoodh Matadin.

Plus, see more celebrities starring in ad campaigns this year! 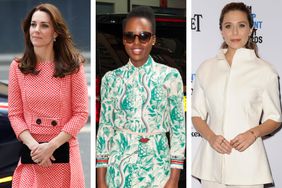