6 Celebrities Who Spoke Out Against the Met Gala

The Met Gala might be one of the most exclusive parties of the year with a guest list that often reads as a who's who of Hollywood and the fashion industry, but not everyone who attends actually likes going. In fact, several celebrities have thrown shade at the event, revealing that despite their gorgeous ensembles, they were miserable.

See which stars aren't huge fans of the Met Gala below.

Paltrow may have looked gorgeous in hot pink Valentino when she attended her last Met Gala in 2013, but on the inside she was miserable. "I'm never going again. It was so un-fun. It was boiling. It was too crowded. I did not enjoy it at all," she told USA Today.

In an interview with Australian radio show hosts Kyle and Jackie O, she piled on even more critiques. "It sucked," she said, "It seems like the it's the best thing in the world, you always think, 'Oh my god, it's going to be so glamorous and amazing and you're going to see all of these people' and then you get there and it's so hot and it's so crowded and everyone's pushing you."

Despite the fact that she said she'd never go again, Paltrow attended in 2017.

After attending her first Met Gala in 2016, Schumer told Howard Stern that it felt like "punishment."

"It’s people doing an impression of having a conversation...I don’t like the farce,” Schumer told Stern. “We’re dressed up like a bunch of f—king a–holes." She then went on to say that it would be her last, though that wasn't the case. The I Feel Pretty actress attended the following year.

During an interview with Amy Schumer in the Lenny Letter, the two stars recounted how much they wanted to leave. "You and I were literally sitting across from each other at the Met Ball, and it was like a crazy countdown to when we could escape. You were like, 'We're honored to be here. We're honored to be here,'" Dunham said.

In an interview with Billboard, Lovato shared just how awful her first Met Gala was in 2016. “I had a terrible experience,” the 26-year-old said. "This one celebrity was a complete bitch and was miserable to be around. It was very cliquey."

“I remember being so uncomfortable that I wanted to drink,” the sober star continued. She left the gala and went straight to an Alcoholics Anonymous meeting.

"I changed my clothes, but I still had my diamonds on—millions of dollars of diamonds on in an AA meeting,” she told the publication. “And I related more to the homeless people in that meeting who struggled with the same struggles that I deal with than the people at the Met Gala—fake and sucking the fashion industry’s d—."

She later posted an Instagram with a photo that she says sums it all up.

Fey was a guest at the 2010 Met Gala, and she hasn't been back since. In an interview with David Letterman, she said he should "drink contact-lens fluid" in order to avoid attending.

"It is such a jerk parade...if you had a million arms and all the people you would punch in the whole world, they were all there," she joked.

The former One Direction member attended the 2016 fête alongside then-girlfriend Gigi Hadid, but he wouldn't exactly call himself a fan of the annual ball. "I did go, but I didn't go there to be like, 'Yo, take me serious,' " he remembers. "I was taking the piss! I went there as my favorite Mortal Kombat character, Jax," he told GQ in 2018.

"The Met Gala is not necessarily anything that I ever knew about or was about. But my [former] stylist … would say to me, 'This is really good for you to do.' And no matter how strong you are mentally, you can always be swayed to do certain things. Now, it's not something I would go to. I'd rather be sitting at my house, doing something productive, than dressing up in really expensive clothes and being photographed on a red carpet … To do the self-indulgent 'Look at me, I'm amazing' thing on the red carpet, it's not me." 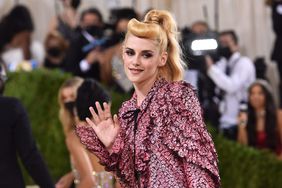