If you've had an Instagram account for awhile, you know that celebrities often post pictures of themselves promoting products. Whether it's Kim Kardashian West promoting Fit Tea or a popular influencer posing at a paid-for event, having sponsored pictures (i.e. pictures of stars using products they are paid to post) is pretty common.

Which makes it even more surprising that a new report from MediaKix shows a whopping 93 percent of celebrity-sponsored posts violate Federal Trade Commission (FTC) guidelines.

Before we get into it further, let's back up a little bit. The FTC helps prevent deceptive marketing practices, but as people have started promoting stuff for money on Instagram, regulation has gotten a lot more difficult.

In sponsored posts, celebrities are supposed to make it clear that they've been paid to put the picture up. If they do this, you'll typically see a "#ad" or "#sponsored" tag somewhere in the visible part of the caption (take a look at Kardashian's savvy Insta for a lesson on how to do it correctly).

But just because it's easy to stay within the guidelines doesn't mean celebs do it. Earlier this year, the FTC had to issue a stern warning to 90 celebrities and influencers who had 'grams in violation of their rules. You think that would've helped clear up some of the problems, but that's where you're (sadly) wrong.

According to the new report, 93 percent of celebrities' Instagram accounts still violate FTC rules, even after the warnings were issued. That's pretty darn bad. In the study, MediaKix zeroed in on Instagram's top 50 celebrity accounts, and found that only 7 percent of the posts fit FTC regulations. Having so many non-FTC-compliant posts cannot be a good sign.

While a lot of stars took down questionable posts earlier this year after the warnings were issued, this is still clearly a problem. We hope that celebrities take note and start tagging their photos accordingly. 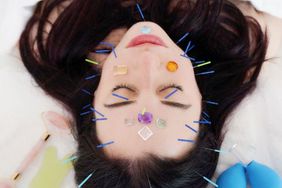