Dr. Amelia Shepherd Is Pregnant in Real Life, Too

Life imitates art. Caterina Scorsone, who plays Dr. Amelia Shepherd on Grey's Anatomy, announced that she's pregnant with an Addams Family-inspired Instagram post. Fans had been speculating about the pregnancy for weeks now and it just so happens that her Grey's character is pregnant, too, making for some serendipitous timing.

"Our Family’s about to get even kookier," she wrote in the post, which featured her two children, Eliza and Paloma, and her husband, Rob Giles. Having her pregnancy on-camera won't be anything new for Scorsone. Back when she was on Private Practice, Shonda Rhimes wrote her first pregnancy onto the show and Scorsone even announced the news the same day as her character did.

"The news came out of left field and I think she decided she could use this for dramatic purposes," she told People. "As an actress it never feels like right time. But once we knew what was happening, we were like, 'This is perfect.'"

Her second pregnancy didn't get written into Grey's, but it seems that Rhimes is ready to do it again. By now, it's something she should be used to. Not only did she write Scorsone's first preganancy right into the show's tangled storylines, she did the same for Chandra Wilson back in Grey's second season.

Scorsone has been very open about her family and parenting on social media. Paloma has Down syndrome and Scorsone does not shy away from speaking about it online. She wants her followers to understand that having a disability isn't necessarily a disadvantage.

"I want to help people expand their understanding of what it is to love a person who isn't 'typical' or who is living with a disability," she told WebMD. "Down syndrome is a genetic variation, and there are lots of genetic variations. There isn't one particular way that a person should be to have value. Life with Pippa is one of the richest gifts our family has ever received." 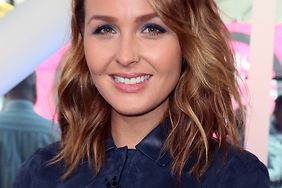