It’s official! You don’t have to be human to partake in London Fashion Week come February.

A-list models Cara Delevingne and Kendall Jenner are officially set to play a major role in this season’s fall 2016 showdown. And while their appearances will be nothing new, it’s their freshly polished wax figures that we’re counting down the days to see.

On Tuesday, Madame Tussauds London announced that the two beloved beauties, together known as #CaKe on social media, will officially receive the wax figure treatment on Feb. 8 as part of "Fashion Week at Madame Tussauds."

Described as an “immersive behind-the-scenes fashion experience," museum visitors will be allowed to get up close and personal with the darlings' lifelike statues. So what can we expect them to look like? Delevingne’s figure will sport a Saint Laurent dress (and signature full brows!), while Jenner’s is set to capture what she’s like as she prepares for the runway backstage.

Jenner has remained tight-lipped about the project, but Delevingne gave us a sneak peek on her Instagram of what to expect (above). We can’t wait to see their too-real creations. 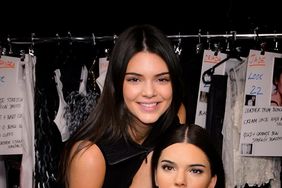 Kendall Jenner Meets Her Wax Figure and the Resemblance Is Uncanny