Forget Saint Laurent runways and Chanel fashion campaigns. Cara Delevingne, who has previously quit modeling, taken up acting, and now stars in Valerian, would like you to know she can also sing.

The 24-year-old English star recently released a track titled "I Feel Everything" for Valerian's soundtrack (listen above) and now, we officially know there's a music video to follow. After the London premiere of her latest flick, where she wore Burberry, a glistening spiderweb collar, and we think said "Sup, girl?" to Rihanna, Delevigne took to Instagram to give us a taste of her musical look.

"I Feel Everything music video out soon!!! Directed by @lucbesson song produced by @pharrell song written by yours truly," she wrote, giving credit where credit's due. In the clip, she takes on three entirely different hair looks as a blonde, brunette, and redhead, while wearing a smartly tailored navy suit. It's jazzy. It's swanky. It's pretty sexy.

Pharrell, who produced the track, and the former model have been collaborating for years. They've previously teamed up for a Chanel film and have now come together to release this buzzy new track.

While we wait for the full version, we'll be watching the clip above.

Courteney Cox Comes Home
It's Been 10 Years Since Rebecca Black Released "Friday," and the Internet's No Kinder to Young Girls 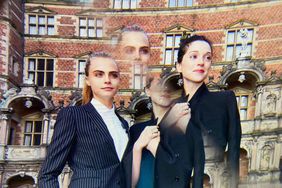