Candice Huffine is tough, but the international plus-size model didn’t always feel that way. It’s been two years since her husband first dared her to take part in a race and she agreed, prompting her to set a New Year's resolution to become a captial-R runner. She achieved her goal—and then some.

“This was a good boost for me to realize, ‘Why do I tell myself I can't do these things?’ ‘Why am I holding myself back from things that I might love?’ ” Huffine told InStyle. “And I told myself, I just won't say ‘I can't’ ever again.”

Now, the model is redefining what it means to have a runner’s bod, and she feels totally badass about doing it. Her determination to keep lacing up her sneakers and power through early mornings and long runs has changed Huffine's perception of what she’s capable of and what other women can do.

“Women don't have to sign up for a literal marathon, but they should definitely try to do something that scares them,” Huffine said. “Because once they realize they can do it and then they accomplish it, they will feel so unstoppable from that point forward.”

This Sunday, the model and creator of the new size-inclusive activewear line Day/Won, which launched last month, is set to run her second marathon of 2017, this time as an ambassador for New York Road Runners’ Team for Kids at the New York City Marathon (home turf, she boasted). The program, aimed at introducing kids to running at young age, is one she’s exceptionally proud to represent. Read the rest of InStyle’s interview with Huffine below, and catch the race on Sunday morning in New York, starting on Staten Island and finishing in Central Park.

Why did you decide to do two marathons in one year?
Because once you start running, you become a competitive, crazy person. Honestly, yes, it's hard and I'm not going to tell you otherwise. But running does something really special to you that you start to crave. And running the Boston Marathon made me feel unstoppable. I had a new outlook on how I wanted to approach all goals in my life, running and career related. So naturally, I wanted to experience that feeling again, and I thought, let's make this marathon year.

What is your goal for this race as opposed to Boston's?
My goals are always pretty simple in that I just want to be the best that I can be. I know it might sound hokey, but I want to remember it in an amazing way. Truly, all of it is an accomplishment. I like to have fun. I want to feel good. I want to have a great day to look back on.

What’s your training schedule been like?
I'm part of the virtual training program that New York Road Runners offers, which is genius 'cause obviously, it puts a coach in your hands. And I've had that set up for 16 weeks. I travel a lot, I'm super busy, we had Fashion Week in September, but knowing my week-long training plan in advance has been really helpful in figuring out my schedule. But it's still hard. This season was very busy for me and training for the marathon on top of that was kind of very stressful, but I kept telling myself, ‘I am not the first busy woman to ever train for or run a marathon.’

When you’re training, are you a morning runner or a night runner?
A night runner! Why are there no night races? That's what I want to know. I have to get the bus at 5:15 a.m. for this race on Sunday. I just feel stronger at night. But you really don't have a choice. Especially when you're training, you have to compromise and fit it in.

What keeps you going on a long run?
I like to set small goals within my larger goals. For example, conquering the Williamsburg Bridge was always a big feat of mine. I wanted to be able to run it back and forth, consecutively without stopping—that's two pretty major hills, and the bridge itself is just two miles. It’s hard. But you kind of just hold your head a little higher and you smile to yourself like, 'Oh, I did it,' which is just proof. You don't need to look at any technicalities or numbers or speed or whatever to feel that you are progressing. It’s the small victories you need to boost your confidence.

What do you want women who don’t think they can be runners to know?
I always like to say this is something that's learned. It's a learned skill and an experience. So the more you do it, the better you get, and you just have to commit to it. I'm on a mission to share that, ladies, oh my gosh, we can literally do anything!

Do you have any go-to post- or pre-run snacks?
The morning of a race, I usually do peanut butter toast with sliced bananas and chia seeds. That, for me, is great energy, fuel, and protein to get me through. Also, I drink a cold brew before. That's one of the first questions I asked my coach when I first started running two years ago. I was like, "Here’s my most vital questions: Can you stop to use the restroom during races and can you drink coffee? That's all I need to know." The answer is yes.

Do you have a particular pump-up playlist?
Yes! I totally do. I've actually been curating it since I started my very first half-marathon two years ago, so it has 250 songs on it and a lot of them have to do with running or reference running somehow, in some broad way. The jams get me through. They are sometimes what get the job done, to be honest. When you feel like you can't go on anymore, you have to put on your go-to song.

What’s your go-to?
For me, "Roar." You can't go wrong with "Roar." And currently, "Glorious" by Macklemore. Although that one is very overwhelming in a beautiful way because it makes you feel so empowered. It actually made me cry a little bit the other day and I had to stop running. Because I started to feel so badass! And then it hit me: I'm about to do this all again. I'm about to have this moment again, which is a really overwhelming feeling in the best of ways. I get very emotional when I'm happy. And there's just something about conquering 26.2 miles and crossing the finish line and wearing that medal and knowing that you did something you once thought impossible but proved to yourself that it isn't—it's a feeling that I encourage women to seek out in some way, shape, or form.

What have you learned about yourself by doing this?
I'm human and we have our doubts and our fears and we can be limiting to ourselves for whatever reason. I think this was a good boost for me to realize I should never tell myself I can't do something.

You recently launched Day/Won, your size-inclusive activewear line. Are you going to be wearing some pieces on race day?
Absolutely! My leggings are the only leggings that I run in.

You’ll also be representing Team for Kids from New York Road Runners. What does that mean to you?
I regret not having [a program like Team for Kids] when I was younger. So I am proud to be connected to encouraging and inspiring kids to bring this into their world because it really can shape your future.

You've mentioned that you’ve been very nervous. Why?
I know I can do it and I've done it before, and I know I'm prepared for it, but there's always a part that's just a little terrifying. And I think that's a good thing. I have that feeling even in work sometimes. I get nervous for big shoots, and I think that that energy is welcomed because the day that you're not nervous or overwhelmed or excited means that you're over it and you shouldn't do it anymore.

Your husband helped kick off this whole thing. Do you ever run with him?
We run together occasionally. He's very fast, but he'll definitely slow it down for a run with me. And we ran a half-marathon for the second year in a row for our wedding anniversary, which has become a tradition. It’s very cool switch up in our lifestyle. We used to order bottles of champagne for our anniversary and now we're choosing to go run 13 miles.

Do you also listen to podcasts while you train? Which ones are the best to run to?
I listen to "Ali on the Run" and "Find Meaning (On The Run)" from Alison Désir. And the other day I found this one from Elizabeth Gilbert. Hers is called, "Magic Lesson with Elizabeth Gilbert" and this one episode in particular was called, "Show Up Before You're Ready.” It was perfect timing to zone out and listen for an hour to stories of incredible women just being in charge of their lives.

Do you think running will keep making your New Year’s resolutions list for 2018?
Well, that's how it started, but this is my life now, so I don't have to just resolve to run another year each year because it's just a no-brainer. Maybe my resolution will be different this year. I'm a runner for life, but my resolution might be to start an actual running group or something like that. Either way, all resolutions will start with running as the base. 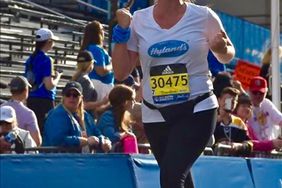