This sounds too good to be true.

A few weeks after singer Madison Beer shot down rumors that she and Brooklyn Beckham were dating, a source has spilled some major tea, saying the 18-year-old photographer has been "hanging out" with his ex-girlfriend, 20-year-old actress Chloë Grace Moretz, again. We're not saying you should get your hopes up for a romantic reunion, but we're not saying not to, either.

These two young stars crushed our hearts when they called it quits in September 2016 after two years of dating. However, there might be hope yet, as People reports they've been "hanging out" again and even attended a party in L.A. together last week.

We definitely wouldn't mind if Beckham and Moretz were an item again. After all, they used to post some of the cutest couple Instagrams.

However, the problem remains that Beckham is heading off to college in the Big Apple soon—the reason Madison Beer said them dating was "unrealistic." Will distance prevent a rekindling? Or will true love prevail?

We're not getting our hopes up just yet, but our interest is definitely piqued! 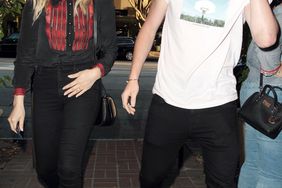