Britney Goes for it in Sheer Dress at Pre-Grammy Gala

Grammys weekend is packed with star-studded events, but the Clive Davis Pre-Grammy gala, held annually on the eve of the awards at the Beverly Hilton hotel, holds its own as one of the hottest tickets in town.

Britney Spears shone brightest—literally—showing off her toned physique in a sheer, custom, beaded Uel Camilo gown and Loriblu shoes, and Jennifer Hudson also wowed a black lace suit and Butani jewels. The stars, along with many, many others, were not only on hand to enjoy a night of musical performances, but also to celebrate the legacy of BET Networks chairman/CEO Debra Lee, who became the first woman to receive the Industry Icon award at the bash.

“It feels great to be honored tonight,” Lee, who sported a Dolce & Gabbana dress topped with a floral applique and black heels told InStyle. “It’s great for me personally, but it’s also great for BET, which has been around for 37 years, and has done so much in the music industry.” The media mogul went on to tell us she was excited to see Mary J. Blige and Bell Biv DeVoe perform in her honor (especially as she hand-picked them to do so).

The Hottest Parties of Grammys Weekend

Inside of the bash, Lorde, clad in a shimmery black Alex Perry dress, shared a laugh with Chance the Rapper, as Paris Jackson mingled with friends at her table behind them in a plunging Tadashi Shoji dress. Nick Jonas, meanwhile, looked dapper in a gray blazer and black jeans.

Jared Leto, who eschewed black tie for a floral-printed jean jacket and black, animal-eared hat, flashed a smile and gave a hug to Diane Warren, who was also embraced by Rita Ora. “You look amazing!,” Ora, stunning in a black beaded Elie Saab dress, told her.

Can we talk about the hat Jared Leto wore to the Clive Davis Gala?

Wiz Khalifa, John Legend, Michael Keaton, Jane Fonda, and company were also in attendance, listening as Bell Biv DeVoe kicked things off with ’90s hit “Poison.” Panic! At the Disco followed, crooning, “Victorious” in sleek black suits. Next, Hudson took the crowd to church as she sang “Hallelujah,” followed by Maxwell, Maren Morris, and Chance the Rapper. “Thank God for the fact that I'm in this room and I'm able to do what I want to do,” the hip hop artist said. Legend was clearly feeling it, too, dancing and throwing up his hands up to Chance’s performance.

Not enough for you? Mary J. Blige, DNCE (of “Cake By the Ocean” renown), Mike Posner and Neil Diamond also gave award-worthy performances. Rock on, indeed. 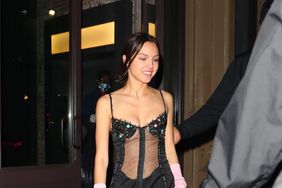