Britney Spears is going back to her roots.

The inaugural honor "recognizes a distinguished artist whose career transcends popular culture and whose music is loved by generations of Radio Disney fans," according to a statement from Radio Disney (per Entertainment Tonight). "Having just celebrated 20 years of Radio Disney in 2016, we are excited to introduce the RDMA 'Icon' Award as special recognition of an artist whose music has been loved and adored by generations of Radio Disney fans," Phil Guerini, Music Strategy VP of Disney Channels Worldwide, said in a statement Wednesday. "We are proud to celebrate Britney as the first recipient for this award acknowledging her chart-topping career on Radio Disney since 1998," he continued.

There's no denying Spears has reached icon status during her career in music and entertainment. Take a peek at the three reasons she deserves the award.

The Radio Disney Music Awards will take place at the Microsoft Theater in Los Angeles. Fans not on hand for the show can watch it the following day—April 30—at 7 p.m. ET/PT across multiple Disney-branded platforms. 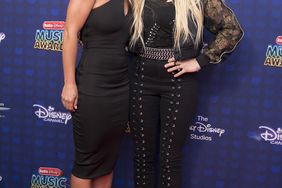