It's the first new music we've heard from the singer since 2016.

Pop music is having a very good day. Though Lady Gaga’s Chromatica may be the release du jour, another top 40 legend had a drop of her own.

Britney Jean Spears re-released her 2016 album Glory on Friday with new cover art (barely-there golden one-piece, chains, desert, you get the gist) and a single most of us haven’t heard — “Mood Ring (By Demand)” was previously only available in Japan.

“Repurposed this since we didn’t use it... You folks wanted a new album cover ….. ta da there you go,” Spears captioned her announcement. “I hope you turn #MoodRing up sooooooo loud.”

Britney Spears May Never Perform Again, According to Son Jayden

Though “Mood Ring” is new to us, there isn’t a lot of evidence that Spears is actually working on new music. To the contrary, in March Spears’s 13-year-old son Jayden Federline claimed his mom was considering quitting music altogether. In an Instagram Live the teen told fans he hadn’t “seen her doing a lot of music at all,” adding, "I remember one time I asked her, 'Mom, what happened to your music? And she was like 'I dunno honey, I think I might just quit it.' And I was like, 'What? What are you saying? You know how much bank you make off that stuff?’" 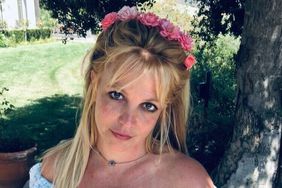