Meghan, Harry, Will, and Kate—if you’re anything like us, their names, titles, and star signs are permanently affixed to your long-term memory (it’s OK, you don’t need to be like us).

That’s right—when Prince William and Kate Middleton travel to Scotland, they become the Earl and Countess of Strathearn. Upon a visit to Ireland, the duo takes on the titles of Baron and Baroness Carrickfergus (catchy, no?).

Similarly, Prince Harry and Meghan Markle are known as the Earl and Countess of Dumbarton in Scotland and Baron and Baroness Kilkeel in Northern Ireland.

These rules apply to Prince Charles and Duchess Camilla as well, though it’s a tad more complicated for the next in line to the throne. In Scotland the pair is known as the Duke and Duchess of Rothesay, but in addition to his dukedom, Prince Charles also holds the titles of Earl of Carrick and Baron of Renfrew.

The sovereign, Queen Elizabeth, is the “fount of honor” (the one who bestows these titles) and is therefore exempt from bearing any prefix other than the singular “Queen.” 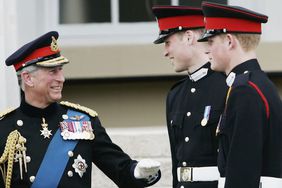