Brie Larson's big year continues to get even better. The 26-year-old actress, who won the Oscar for Best Actress this year for her performance in Room, just got a new, very special role. At Comic-Con on Saturday night, Marvel announced that Larson will take on the role of Captain Marvel in Marvel Studio's first female-led superhero film, set to come out on March 8, 2019.

During a panel at the festival, Marvel Studios president Kevin Feige said "Captain Marvel has gone by many names in the comics, has had many people who've inhabited that costume and used that power base. I want to make it very clear: This hero's name is Carol Danvers."

The movie was written by Guardians of the Galaxy writer Nicole Perlman, making her the first woman to write a Marvel movie along with Meg LeFauve. The character of Danvers first appeared in the comics in 1968. She is a fighter pilot with special powers she developed during an explosion, including "flight, enhanced strength, durability and the ability to shoot concussive energy bursts from her hands." Larson is clearly thrilled as she tweeted a picture of herself in a Captain Marvel hat at the event with the caption, "Call me Captain Marvel."

Fellow Marvel universe Captain Chris Evans (aka Captain America) is also excited for Larson. During an interview back in June when he heard she was possibly being cast in the role, he said, "I really hope that happens. I love Brie Larson. We did a movie together back in '09, we did Scott Pilgrim vs. the World. I cannot say enough about Brie Larson. I think she is phenomenal, and I really hope that happens."

Congrats to Larson on her new gig! 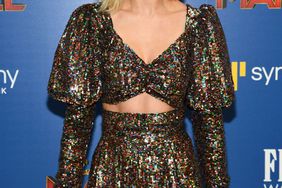