Why blend into the background when you can make a fierce—and unforgettable—statement with your clothes? Lupita Nyong'o, first-time Oscar winner for Best Supporting Actress for her role in the much-buzzed-about film (and now Oscar Best Picture winner) 12 Years a Slave, embraces the bold in a passionate mix of vibrant colors and uninhibited prints. Nyongo's style is utterly riveting, and her Cinderella-esque look at the 86th Academy Awards was no exception. "I'm a little dazed," Nyong'o tells InStyle of winning a coveted gold statuette. "I can't believe this is in my hands. I can't believe this is real life."

Just before graduating from the Yale School of Drama, the actress, who hails from Kenya, auditioned for the film 12 Years a Slave, based on the true story of Solomon Northup, who was kidnapped in 1841 and sold into bondage. "I had to go to an emotional place, and it was beyond hard," says Nyong'o of her character, Patsey, an abused slave who works alongside Northup on a plantation. "But I felt a connection in my gut—I had to play this part." After learning that she nabbed the role, landing her alongside co-stars Brad Pitt and Michael Fassbender, an ecstatic Nyong'o placed a (very) late-night call to her family in Kenya. Her dad got the news first. "I said, 'Daddy, guess what? I'm going to be in a movie with Brad Pitt. Do you know him?' And in this groggy voice he said, 'Not personally, but it's nice that you got a job. Good night.' That was the perspective I needed at the moment!"

Interestingly enough, before she got in front of the camera, Nyong'o worked behind it. She directed In My Genes, a 2009 documentary about the prejudices facing the albinism community in Kenya, which garnered international acclaim and made an impact on legislation in her home country. "It was a labor of love," says Nyong'o, "and I'm so glad I did it." As of late, she's learning yet another skill: dressing for the red carpet. "I didn't pay attention to fashion until now," the actress insists. "I'm having fun discovering designers who make things that express who I am." One fave: the dramatic printed pieces of Suno, a label produced, appropriately enough, in Kenya, as well as in Peru and India. "The clothes convey strength, but they're funky too."

This feature originally appeared in InStyle's December 2013 issue. For more stories like this, pick up the March issue of InStyle, available on newsstands and for digital download now. 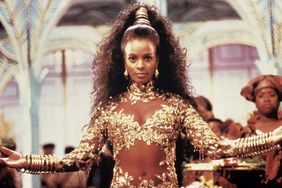 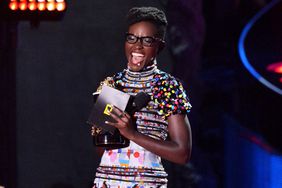