That little pink bow is a TREND.

It's quarantine. Our plans are on hold, our outfits are tucked away in our closets in favor of sweatpants and, of course, our hair is long. This goes for celebrities as well —just take Bradley Cooper, for example. The actor has been self-isolating in New York City, where he lives with his three-year-old daughter, Lea De Seine, whom he shares with ex Irina Shayk.

On Wednesday, we saw a glowing example of his long tresses when he was out taking a walk amid isolation. Cooper held his daughter's hand to cross the street, wearing a casual white tee, blue jeans and an adorable little pink headband to hold back his growing hair. While it's certainly possible the hair accessory belonged to the actor, the small, off-center bow (and stretched-out, too-small-for-him material) points to the owner being the little girl next to him. Regardless, this is now a TREND and I will be buying a pack for me and my husband.

In February, reports surfaced that Shayk and Cooper had decided it would be best to move to New York City where they would raise Lea following their split. While the couple is notoriously private, it is great to see things working out with their life on the east coast. 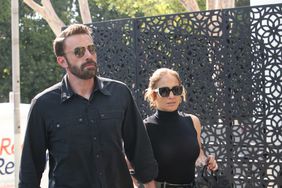