Blake Lively Gets Ready for The Shallows Premiere Red Carpet: Only On InStyle

Fact: No one does a ponytail quite like Blake Lively. While the fuss-free hairstyle is one we often turn to on days when we’ve hit snooze a few too many times, the actress and mom-to-be has the uncanny ability to make the style look chic every single time. Even further proof: The star’s sleek, polished high pony that she wore to last night’s premiere of her new film, The Shallows in New York City.

The look came courtesy of Lively’s longtime go-to hairstylist, Rod Ortega, who’s also the hands behind the star’s beachy waves in the thriller film, and all of the ‘dos that have complimented Lively’s recent head-turning maternity style. “It’s so amazing to be able to work with an actress like Blake Lively who is so incredibly interested and involved in this creative, artistic process. I think the reason she has such an iconic signature look is because she has been so involved in this process and we work together so closely,” Ortega told InStyle.

To get a closer glimpse at what goes into getting red carpet-ready Ortega exclusively shared a few snaps with InStyle as he got Lively ready for the big premiere.

The inspiration behind Lively’s straight, voluminous pony? ‘70s beauty icons like Cher and Bianca Jagger. “I first started with this amazing book I pulled from my library, a photographer’s book called Gloss by Chris Von Wangenheim. It captured images and icons of women and their distinct hair styles in the ‘70s era from Cher to Bianca Jagger. It depicts fashion hair at its highest form: voluminous, full-textured shine, and its gorgeous silhouettes from the late 1970’s,” explains Orgeta.

Lively’s pin-straight pony defied New York’s humidity thanks to a few styling tricks. Ortega blow-dried the actress’s strands using T3 Featherweight Luxe 2I ($250; sephora.com) and a flat brush to keep things smooth from the get-go. Once the hair was dry, he went over Lively’s entire head in two-inch sections with T3 Single Pass Compact Iron ($89; sephora.com) before using the flat brush to pull Lively’s hair into a high pony. “It was important to place the pony at the crown of her [Lively’s] head so it could be seen from the front,” Ortega reveals.

Since the red carpet calls for anything but an average pony, Ortega wrapped a two-inch piece of hair around the pony and secured it with bobby pins. A few generous spritzes of L'Oréal Paris Elnett Satin Extra Strong Hold Hair Spray ($15; ulta.com) was the finishing touch that held the look in place all night.

Ortega also filled us in on the key to always getting a perfect pony like Lively’s: “Every time I do a pony, I leave out the front pieces of the hair that frame the face. This allows me to manipulate the hair and get the exact texture and look that I want so it doesn’t have to be just a tight straight back pony. You can pull the pieces out a little bit and have it be more messy and textured, you can slick it back for a sleek look, or you can pull the pieces up for more volume on the top. Once you decide the kind of style you want, pull back those front pieces and secure with the rest of the pony.” 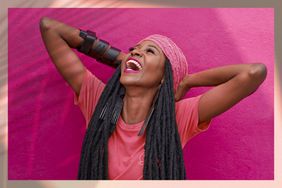