She knows you think her baggy clothes are odd.

Fans and haters alike got a strong message from Billie Eilish on the opening night of her Where Do We Go? World Tour in Miami, Florida. According to The Guardian, Eilish's set included a segment where she addressed anyone who judged her body and the way that she dresses. Complete with a video and a monologue, Eilish let critics know that she's not ashamed about how she looks and she's not letting anyone tell her that she needs to look a certain way.

She singled out the double standard that women all over the world face. If they're too sexy, they're promiscuous. If they're covered up, they're not feminine. She posed a question right back to anyone hurling insults her way: why?

"So while I feel your stares, your disapproval or your sighs of relief, if I lived by them, I'd never be able to move," she continued. "Would you like me to be smaller? Weaker? Softer? Taller? Would you like me to be quiet? Do my shoulders provoke you? Does my chest? Am I my stomach? My hips? The body I was born with, is it not what you wanted? If I wear what is comfortable, I am not a woman. If I shed the layers, I am a slut. Though you've never seen my body, you still judge it and judge me for it. Why?"

Eilish's monologue continued, asking who, exactly, controls someone's identity. She told her fans that nobody has that power. Eilish said that she controls how people see her and that anyone can do the same.

"We decide who they are. We decide what they're worth," she added. "If I wear more, if I wear less, who decides what that makes me? What that means? Is my value based only on your perception? Or is your opinion of me not my responsibility?"

E! News reports that Eilish opened up about her personal style last year, when she appeared in a campaign for Calvin Klein.

"I never want the world to know everything about me," she said. "I mean, that's why I wear big, baggy clothes — nobody can have an opinion because they haven't seen what's underneath, you know?" 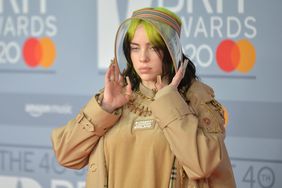