A string of happy accidents led to Billie Eilish letting fans know that she still manages to have fangirl moments when it comes to Britney Spears. In the latest episode of her Apple Music radio show, Me & Dad Radio, Eilish's phone rang, revealing the fact that her ringtone is Spear's "Baby One More Time." After that, however, she told her father Patrick (who happens to be her co-host) that when she found out Spears was dancing to "Bad Guy" back in June and "Bury a Friend" a few weeks later.

"Shoutout to Britney too, because lately, she's been [...] Or since I was on Instagram, which was weeks ago now, she posted a couple of videos to my songs and I almost pooped my pants," Eilish said.

While Eilish's songs may not seem to have much in common with Spears's bubblegum classics, Eilish has been vocal about her musical preferences, which include Spears, the Spice Girls, Avril Lavigne, and Taylor Swift.

"So, I love you, Britney," Eilish continued. "But this one, this is a classic. Everybody knows 'Baby One More Time.' I used to dance in the living room to this on my tiny, little, horrible speaker. Let's go. Let's go, Britney."

"Need I say more ..... Billie !!!!! I know ..... I should makeup on and brush my hair but I just wanna dance," Spears captioned her video featuring "Bury a Friend," which showcased Spears's signature Instagram dancing.

If the shared admiration leads to a crossover collab, Eilish can expect plenty of fans to freak out and, if we're lucky, a dance vid courtesy the one and only Britney Spears. 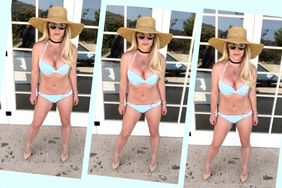 Britney Spears Just Name-Dropped Where She Bought Her Favorite Bikini