The new year is already looking up: Kim Kardashian West is back on Instagram, Miley Cyrus and Liam Hemsworth are even cuter than they were in 2012, and Beyoncé is headlining Coachella. Yes, you read that right.

Queen Bey will take the stage at the music festival in April 2017, making history as the first female headliner since Björk in 2007. The Lemonade singer is set to play on Saturday, April 15 and April 22, alongside acts like Bon Iver, Future, and DJ Snake. Radiohead will be Friday's headliner, while Kendrick Lamar will close out the show on Sunday. Acts like Mac Miller, Travis Scott, Lorde, and BANKS will also take the stage during the two-weekend festival at the Empire Polo Club in Indio, Calif.

All three headliners released new music in 2016, but none received more attention than Bey's visual album, Lemonade, which took home the Soul Train Music Award for Album of the Year. From that now-iconic yellow dress to her expert choreography, 2016 was peak Beyoncé, and we can't wait to see her bring it to life on the Coachella main stage.

Here's to hoping she brings her baseball bat. 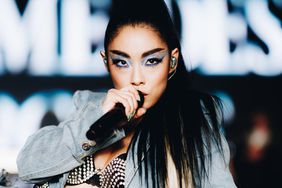 What a Coachella First-Timer Is Packing in Her Suitcase