Bethenny Frankel may be adding another TV gig to her resume—talk show host! The Hollywood Reporter revealed that Frankel is currently filming the pilot for an advice-based talk show with Telepictures, the same company behind The Tyra Banks Show and Ellen. “I want to be on TV in a format where I can have a longer conversation with my fans rather than 140 characters on Twitter,” the Bravo star said. The busy mom has also signed on for a third season of her hit series Bethenny Ever After, and her Skinnygirl shapewear is set to debut this summer, which means we'll definitely be seeing lots more of her soon! Tell us: Would you watch her talk show?

Reese Witherspoon Isn't Afraid to Say She's the Best
It's Been 10 Years Since Rebecca Black Released "Friday," and the Internet's No Kinder to Young Girls

After NYFW, Alexandra Daddario Is Taking a Super Smart Tip From Her "White" "Lotus" Character 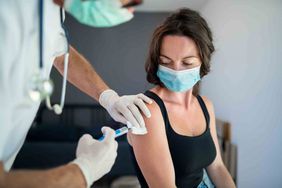