Benedict Cumberbatch Is Going to Be a Dad!

We're only seven days into 2015 and it's already shaping up to be quite the year for Benedict Cumberbatch. The actor and his fiancée Sophie Hunter have announced that they are expecting their first child together. "They are both over the moon," his rep said in a statement to People.

News broke that Cumberbatch and Hunter were engaged to be married in early November when the pair took out an announcement in the "forthcoming marriages" section U.K.'s The Times newspaper. No word yet on the gender of the baby or when it's due, although the little one will surely be the cherry on top of what is already turning out to be a memorable month for Cumberbatch. Along with the rest of the cast from The Immitation Game, the father-to-be picked up an award at last weekend's Palm Springs International Film Festival, and he's up for the Best Actor in a Film, Drama trophy at this Sunday's Golden Globes. Congratulations to the couple!

Benedict Cumberbatch and Sophie Hunter Make Their Red Carpet Debut as an Engaged Couple
Was this page helpful?
Thanks for your feedback!
Tell us why!
Related Articles 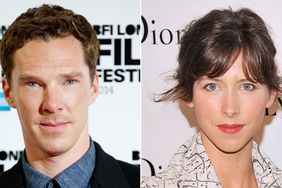