Ben Stiller on Practicing Blue Steel for Zoolander 2: "When I Brush My Hair It Happens Uncontrollably"

When we spotted Ben Stiller at the 26th Annual American Cinematheque Awards, where he was the guest of honor, there's only one thing we wanted to know: Was he already practicing Derek Zoolander's epic "Blue Steel" look for the forthcoming sequel to 2001's fashion cult classic film? "Every time I brush my hair it just happens uncontrollably," he told InStyle.com of the iconic stare he perfected in Zoolander. "It’s kind of embarrassing." Stiller—who has shot down rumors that Lady Gaga would appear in the movie—said the sequel is still very much in the works. "The movie’s not going yet, but hopefully we can get it going," Stiller told InStyle.com. "I look forward to it happening someday!" His wife, Christine Taylor—who also starred in the film!—is already a card-bearing member of the Zoolander fan club. "It would be a really cool thing if it happened," she told us. "It’s a part he loves so much!" 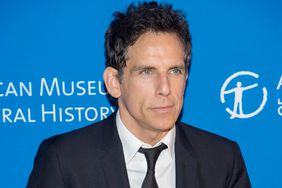