Say it ain't so—after a decade together, Ben Affleck and Jennifer Garner are officially splitting up. Just yesterday, we celebrated the duo's milestone 10-year anniversary, and today the pair confirmed to People that they are divorcing.

"After much thought and careful consideration, we have made the difficult decision to divorce," Affleck and Garner said in a joint statement. "We go forward with love and friendship for one another and a commitment to co-parenting our children whose privacy we ask to be respected during this difficult time. This will be our only comment on this private, family matter. Thank you for understanding." They have three children—Violet, 9, Seraphina, 6, and Samuel, 3—together.

Last year, Garner appeared on the cover of InStyle's October issue, where she opened up about her relationship with Affleck. "You can't expect to be courted all the time, and I don't want to court him right now—I don't have the energy! But we're definitely in a very mindful place where we're making an effort to be together, do things at the same time, and be loving." Despite telling us, "you can't resent your partner for working hard—it's just not fair," rumors have swirled that Affleck's workaholic nature is to blame for their split. We're so sorry to hear this news, and we wish their family the best.

The stars hit the red carpet for the first time together at the Los Angeles premiere of their movie, Daredevil. 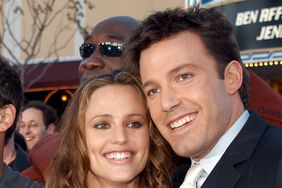