Barbie Gets Her Own Sophia Webster Shoe Collection, and It's Everything

Barbie may be doll-size in real life, but her presence is larger than ever in the fashion industry. She's been transformed multiple times over—as an Herve Leger model, as a mini Karl Lagerfeld, as muse to Jeremy Scott of Moschino, and as a red carpet fixture outfitted in couture. And now, on the heels of her new shoe venture into flats (after more than five decades of exclusively stepping into stilettos), Barbie has joined forces with celeb-fave designer Sophia Webster to launch a footwear collection that fuses Barbie's signature style with Webster's design whimsicality.

"Creating a shoe collection for Barbie has always been my dream project, but getting to be a part of her embracing flats for the first time made it extra exciting, and deeply personal," Webster says. "I love that this concept strikes a balance between dreams and reality—the idea of getting Barbie in some hi-tops and setting her loose in East London instantly appealed."

Expect a lot of pink. A lot of pink. The Barbie for Sophia Webster collection ($236 to $690) comprises cool high-tops (with the Barbie logo scrawled all over the shoelaces), butterfly-accented heels, mixed-print slip-ons, and sandals that boast "Barbie Doll" speech bubbles. And it's not just for grown-ups. Mini versions are available for fashionable tots. Lastly, on top of a shoe collection, Sophia Webster has also dressed a limited edition Barbie, who will be sporting high-top sneaks with the option of other shoe styles.

"Sophia has brilliantly captured Barbie’s spirit with an imaginative collaboration of flats and heels that allow girls of all ages to express themselves through Barbie and of course, great fashion," says Evelyn Mazzocco, Barbie senior vice president and global brand general manager.

The collection won't be available until Thursday, Aug. 27 in Selfridges London and sophiawebster.com. In the meantime, scroll through all the Barbie for Sophia Webster designs. One thing's for sure: Barbie is on a high fashion kick.

Barbie Can Wear Flats for the First Time Ever
Related Articles 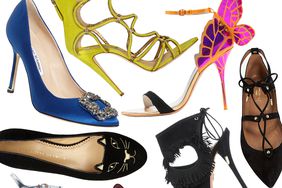 From Manolo Blahnik to Brian Atwood: Meet 5 Designers Behind Your Favorite Shoe Brands