Barack and Michelle Obama May Be America's Next Reality Stars

Now that they’ve conquered the political realm, Michelle and Barack Obama are on to their next adventure: show biz. Seriously.

As it turns out, Malia isn’t the only member of the first family with Hollywood aspirations—Barack and Michelle recently entered into a “multi-year agreement” with Netflix to produce films and series for the platform, which may include scripted series, unscripted series, docu-series, documentaries, and features.

So … basically everything is on the table, including reality TV. But before you start fantasizing about a Keeping Up with the Obamas empire, it sounds like the former president and first lady have something a little different in mind:

“One of the simple joys of our time in public service was getting to meet so many fascinating people from all walks of life, and to help them share their experiences with a wider audience,” said President Obama in a statement released by Netflix. “That’s why Michelle and I are so excited to partner with Netflix—we hope to cultivate and curate the talented, inspiring, creative voices who are able to promote greater empathy and understanding between peoples, and help them share their stories with the entire world.”

Michelle Obama Is Still in Disbelief Over the 2016 Election Results

“Barack and I have always believed in the power of storytelling to inspire us, to make us think differently about the world around us, and to help us open our minds and hearts to others,” Michelle said, echoing her husband’s sentiment. “Netflix’s unparalleled service is a natural fit for the kinds of stories we want to share, and we look forward to starting this exciting new partnership.”

Does this mean Barack and Michelle are going to start attending the awards show circuit? Michelle’s toned arms deserve nothing more. 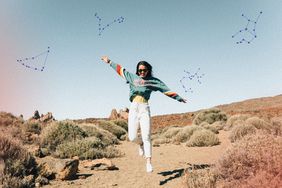