Starting in March, Mad Men fans can once again head to Banana Republic to satisfy their cravings for the show's spot-on '60s style! The retailer will launch its third capsule collection inspired by AMC's hit series this spring, and there's one specific character in mind this time around: Jessica Paré's Megan (aka Don Draper's one-time secretary turned new wife). The collection is being helmed by Banana Republic Creative Director and Executive Vice President of Design Simon Kneen—who created the sketch shown right—in collaboration with the show's award-winning costume designer Janie Bryant. The clothing will reflect the mod fashions of the late 1960s, moving away from the classic tailoring of the late '50s/early '60s that made the show famous. Star Vincent Kartheiser, who plays Don's colleague Pete, told InStyle.com that he is extremely fond of the fresh sartorial spin: "I like the new style on the show, though it’s not so much an evolution [from past looks] as just something new. The coats, the clashing colors, the vests, the ties with the patterned shirts, I just love that," the actor told us. Stay tuned for a look at the entire collection, coming next week!, which should help tide you over until it hits stores in March. 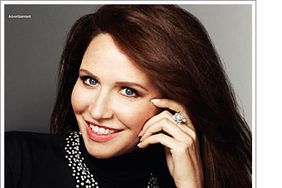