She's setting the record straight on their relationship status.

Despite a drama-filled finale of Peter Weber's season on The Bachelor — in which the audience saw the pilot get engaged, break off said engagement, and start dating the show's runner-up only to split from her three days later — many still had questions about Weber's love life. Particularly, if, the rumors of him dating one of the show's producer behind-the-scenes were true.

Right before the season aired, fans began to speculate that Peter ended up with none of the contestants, and, instead, was dating his producer, Julie LaPlaca, after photos of the pair surfaced on social media. However, on Friday, LaPlaca set the record straight on her and Peter's relationship status, and it turns out, they're just friends.

Posting a throwback photo of herself and Peter from New Year's Eve in New York City on Instagram, Julie addressed the dating rumors in the caption. “Yes that was @pilot_pete in the tan jacket, no we didn’t kiss at midnight," she wrote. "But, whoever ends up as his copilot for life is one lucky lady, because this guy has a heart of gold.”

Last month, the show's host, Chris Harrison, only fueled the farfetched theory when a reporter asked about LaPlaca and Weber's possible romance. “Julie, an amazing, talented, smart producer that works for us, works on the show, so she's with Peter and she's with all of us,” he said. “I'll just say this, it's an intimate relationship.”

ABC senior vice president Robert Mills also didn't do much to stop the speculation, telling Entertainment Tonight: “I’m not going to confirm or deny about whether he ends up with a producer. I don’t know how we’d ever top that, though!" Now, with Peter single again, who knows what will happen? 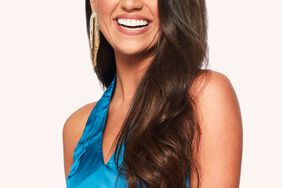