Audrey Hepburn is a movie icon rivaled by few others, but there's more to her than just what we see on the screen. Now, 25 years after her death, Hepburn's family is speaking up about what the actress was like and the struggles she endured during her tumultuous childhood.

People spoke to Hepburn's son, Luca Dotti, and Robert Wolders, her romantic partner from 1980 until her passing in 1993, about the actress's life and legacy. Scroll through our top seven takeaways from the interview below, and get to know the legend of the silver screen in a whole new way.

“By the end of the war, [Hepburn] was very close to death,” said Dotti. “She survived by eating nettles and tulip bulbs and drinking water to fill her stomach. She was almost 5' 6" and weighed 88 pounds. She had jaundice and edema."

2. Anemia Plagued Her Throughout Her Life

Dotti said that Hepburn's anemia might have been caused by the starvation she endured as a child during the war.

3. She Was the Same Age as Anne Frank

The actress was the same age as Anne Frank and [later] said: “That was the girl who didn’t make it and I did.” Her voice would crack, and her eyes would fill with tears" when discussing the subject, according to Dotti.

4. She Loved Pasta and Grains

“People think because she was skinny that she had an eating disorder, but it’s not true,” said Dotti. “She loved Italian food and pasta. She ate a lot of grains, not a lot of meat, and a little bit of everything.”

5. She Did Not Go on Diets and Enjoyed Scotch

Wolders said that Hepburn did not diet, but enjoyed exercise, chocolate, and Scotch.

6. But Exercise Wasn't Something She Stressed Over

“We’d walk for miles. She could outwalk me,” Wolders said.

“She had a healthy metabolism, but she was not excessive. She never said, ‘I have to do five miles today.’ She didn’t diet. We had brown bread with jam for breakfast, lunch would be chicken or veal or pasta, often with vegetables from the garden, and for dinner we often had soup with chicken and vegetables. She had chocolate after dinner, baking chocolate. She had a finger or two of Scotch at night.”

7. Her Personal Collection of Dresses and Memorabilia Is Heading to Auction 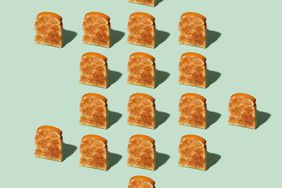