Armie Hammer and his wife Elizabeth Chambers are head over heels for the new addition to their family.

After welcoming their son Jan. 15, the couple finally revealed their baby boy's name on Instagram Friday with a photo of him cuddling up with his big sister, 2-year-old Harper.

"Emerging from his sister's smooches to say hello. Welcome to the world, Ford Douglas Armand Hammer!," Chambers captioned the snap, which showed Harper dressed up in a white dress paired with a white hairbow as she crouched next to Ford, put her arm around him and kissed his head.

Ford, meanwhile, slept soundly in the midst of her smooches, as he lay swaddled on a furry blanket. Armie went on to share the photo and caption on his page as well.

Coo Over Every Celebrity Baby Born in 2017

Although the Nocturnal Animals actor and his wife waited to share Ford's name, they have not been shy about posting photos of their newly cemented family of four since his arrival. As they were leaving the hospital with their little one, Armie shared a photo of the four of them, which showed Chambers wearing a black dress and booties, looking like she hadn't given birth at all.

"This is our family," he wrote alongside the photo. "My wife, who is so strong and fierce she not only tried to walk herself out of the hospital room on her own two feet, but made that hallway look like a runway on the way ou—I love you and am so impressed with you, wife."

"Harper, our perfect daughter who already tries to comfort and smother her younger brother with love and kisses," he continued. "And the newest addition: our Son (future world heavyweight champ) #TheHammily."

Chambers also posted a photo of herself cradling their newborn with a smile as they had a family day out on the town in Los Angeles. 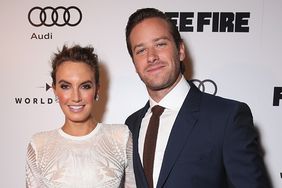 Armie Hammer and His Wife are Expecting Their Second Child