We might not know who Bachelor Arie Luyendyk Jr. will walk down the aisle with—Becca, Kendall, or Lauren B. are all still vying for his heart and fantasy suite card—but that doesn’t mean he hasn’t given some serious thought to his other wedding day details.

After all, Luyendyk Jr. is quite possibly the most determined Bachelor ever to actually get his fairytale ending, and with that comes some pre-nuptial daydreaming, natch.

“I’m so easygoing when it comes to that kind of stuff,” Luyendyk Jr. told InStyle when we caught up with him earlier this season. “But I’ve thought about things like if it might be in a church or on the beach. It really just depends on what my fiancé likes and wants.”

The Sexiest Thing You Can Wear on a Date, According to The Bachelor

With so much to consider, there is one special place that Luyendyk Jr. has on his mind for the big day: the Netherlands, where he was born.

“My younger brother had such a beautiful wedding in Holland,” he said of the 2017 ceremony that took place at Kasteel Maurick, a castle in the Netherlands that looks straight out of a Bachelor date (above).

And besides venue inspiration, Luyendyk Jr. admits that his brother’s wedding was a turning point for him personally as well. “It was a big shift for me,” he said. “He’s 24, so seeing him happy and ready to take that next step in his life made me want that for myself.”

Though he is still nailing down the who and the where, it doesn’t seem like there will be a huge televised ceremony in his future either, like former Bachelor couples Sean and Catherine Lowe or Jason and Molly Mesnick.

“I think a smaller wedding would be cool,” he said. But then again, never say never. “It will probably be a team decision though. The smartest thing any guy can say is, ‘Whatever my fiancé wants.’”

The Bachelor is on Mondays at 8 p.m. ET on ABC. 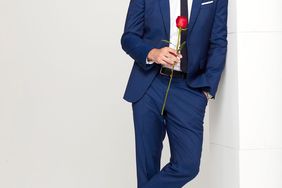 This is What Arie Luyendyk Jr. Thinks of Your Bachelor Fantasy League