We almost missed it.

All eyes were on Ariana Grande during her time on the Grammys red carpet, especially since she wore a beautiful tulle gown straight out of a fairy tale.

But while we were looking at her gorgeous dress, it was easy to miss the fact that she debuted a new tattoo during the event. The "thank u, next" singer showed off a new butterfly design peeking out over the arm-length gloves she wore on her left arm.

Grande has several tattoos – over 30 to be exact – including an anime tribute to the Studio Ghibli film Spirited Away, a dainty Pokémon piece of her favorite monster, Eevee, and plenty more where that came from. And that's not even counting all of the tributes to her music, those she had covered up in relation to ex Pete Davidson, and those as old as the Arianator fandom.

But typically, Grande shows off her ink when she gets it, especially when it's a visible tat like the one she just debuted at the Grammys red carpet. It's unclear when she got this one, but perhaps that's by design. She might have wanted to descend upon music's biggest night with a dynamite set of outfit changes as well as an exciting new piece of artwork.

Whatever the case may be, Ariana rocked out her Grammys looks – both of them – and we can't wait to see what ink she decides to get next. 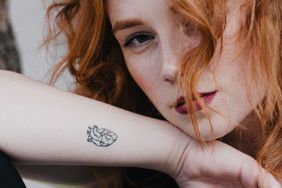