He is getting so big!

Royal-watchers and fans of famous kiddos around the globe have plenty to celebrate. Days after Kensington Palace released photos of Princess Charlotte to commemorate her second birthday, Meghan Markle and Prince Harry shared a sweet video of baby Archie to celebrate his very first birthday. While Harry filmed, Markle reads "Duck! Rabbit!" to Archie. He adorably wiggles around in a onesie as she reads.

The video was shared to the Save With Stories account, where the family is asking people to donate money to local food banks.

Though Meghan and Harry have been careful about sharing images of Archie, they have released photos for big occasions, such as Prince Harry's birthday and a 2019 roundup. Like her sister-in-law, Kate Middleton, many of the photos are taken by Meghan and the photo captions often let followers know exactly who was behind the lens.

Archie and Co. are celebrating his first birthday in Los Angeles, where the former Sussex Royals have set up a home base. Previous reports stated that Harry and Meghan intended on having two birthday parties for Archie, one stateside and another at the queen's Balmoral estate later in the summer, though the state of the world may keep that from happening. For now, it's safe to assume that Meghan's mother, Doria Ragland, as well as close friends Abigail Spencer and Jessica Mulroney will be around to celebrate, if only virtually. 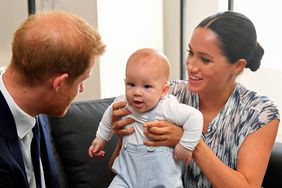 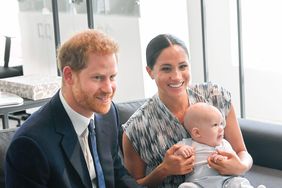