Today, Oscar-winning actress Angelina Jolie turns 42 years old. As someone who grew up in the limelight, Jolie (whose fabulous fashion sense spans decades), is not only a red carpet favorite, but a fixture. She's no stranger to knocking out red carpet winners, dropping jaws with every turn and sparking social media frenzy. (Who could forget her right leg at the 2012 Academy Awards?)

The brunette bombshell has got the red carpet routine down pat. Back in the day, she channeled her Lara Croft character and toughened up at the 2001 Tomb Raider premiere in a black crop top and badass leather pants, revealing her cool tats. Ten years later, she stunned at the 2011 Golden Globe Awards in an emerald Atelier Versace creation embroidered all over with Swarovski crystals. Showing her wide red carpet range, she's even epitomized Old Hollywood glamour in a gorgeous metallic Atelier Versace number.

The mom-of-six is more than a style stunner, however. She shocked the world when she revealed her decision to remove her ovaries in a touching op-ed, and is well-known for her humanitarian efforts, serving as a UN ambassador since 2001.

In honor of her birthday, we've compiled her most memorable red carpet looks through the years. Happy birthday, Angie! 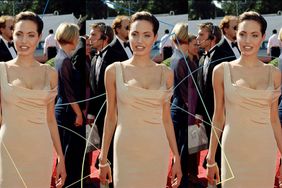