Amy Schumer's dating life might be a train wreck (her latest film Trainwreck—out in theaters today—is based on her track record IRL), but her red carpet fashion is anything but. Frankly, she's been killing it at every single outing, from premieres to awards shows.

"There's a bunch that I love, and I've kind of aged into it," she tells InStyle about her favorite designers, specifically calling out Narciso Rodriguez, Rebecca Minkoff, and Christian Siriano. "I like stuff that shows my body. I'm not a stick, but I feel very much like a woman, and I want to show that."

Clearly, she has succeeded. From a siren-red curve-hugging Narciso Rodriguez dress (above, left) to a graphic black-and-white Balmain design (right), the comedienne has found what works for her, taking risks and experimenting with colors, silhouettes, and prints along the way.

And her knack for fashion doesn't stop at the red carpet either. She has teamed up with the Trainwreck costume designer Leesa Evans to launch a style fund, a charity that empowers women through fashion. "Because dressing yourself is not something that we're all blessed with," she says. "This charity will help women with their confidence and help them learn how to dress themselves." That stress of not knowing what to wear is something that can personally relate to. "I'm not good at dressing myself. If I have to do stand up, I end up tearing my closet apart," she continues. "I can't find anything, and you just want to cry. Hopefully, the work [Lisa and I] are doing will help women feel better."

Not to disagree with Schumer, but we think she's exceptional at dressing herself. And we have the proof. Ahead, take a look at her best moments on the red carpet.

— With reporting by Scott Huver 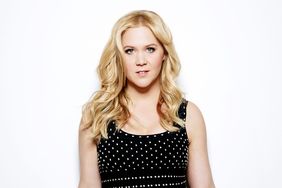