On Monday night the pair stepped out for a screening of Netflix's new documentary The White Helmets at Bulgari Hotel in London. The documentary short shows the effects of daily airstrikes on civilian targets in Syria by following a group of first responders (knows as the White Helmets) as they risk their lives to pull victims from the rubble.

Amal looked stunning, per usual, for the affair and wore a colorful floral minidress, black floral-patterned tights, and black suede booties. The 38-year-old human rights lawyer wore her long brown strands styled in fuss-free natural waves, and opted for a wintery plum pout. George looked dapper beside his beautiful wife dressed in an all-black suit and sporting a bit of rugged facial hair.

At one point in the night, George, 55, shared a few words, thanking the film's creators for shining a spotlight on the important work the White Helmets volunteers have done.

"What is extraordinary is these people put on these white helmets and run toward violence while everyone else is running away from it," he continued. "Where there is no other structure or society, they are there to protect. And they risk their lives to do it. First and foremost they are heroes."

See the trailer for The White Helmets (available to stream via Netflix now) above. 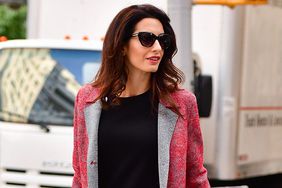