Amal Clooney hasn't let her celebrity status distract her from serving the greater good. The accomplished human rights lawyer (who just so happens to be married to Hollywood A-lister George Clooney) sat down with NBC News's Cynthia McFadden for her first full American network TV interview not to talk fame or fashion, but her most recent legal battle.

Clooney currently represents Mohamed Nasheed, the former president of the Maldives who was forced out of office and into jail after being slapped with suspicious charges of terrorism. In the sit-down interview Clooney discussed how she is pushing to impose sanctions against the tiny's island country's current regime until he is freed.

There Is Now a Scholarship in Amal Clooney's Name

"Democracy is dead in the Maldives," she says in the interview. "Literally, if there were an election now there would be no one to run against the president. Every opposition leader is either behind bars or being pursued by the government through the courts."

As for her even more high-profile private life? Clooney gave little away, admitting only that her recent rise to fame has only helped her legal endeavors.

"I don't really see myself in the same way because I'm still doing the same job that I used to before. If there's more attention paid for whatever reason to that, then I think that's good, "she told McFadden. "I think there is a certain amount of responsibility that comes with that. And I think I'm exercising it in an appropriate manner by continuing to do this kind of work." 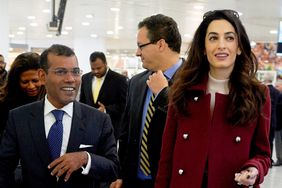 This Is How Amal Clooney Does Winter Work Wear