Ted Yoho reportedly called the congresswoman "disgusting" and a "f—king b—."

Rep. Alexandria Ocasio-Cortez was confronted this week on Capitol Hill by Ted Yoho, a Florida representative who took issue with her prior statements on crime and policing.

The Hill reports Ocasio-Cortez was going into the Capitol building to cast a vote while Yoho was leaving, and in a brief exchange, Yoho told her she was "disgusting" for having suggested poverty and unemployment are the reason for an uptick in crime in New York City.

"You are out of your freaking mind," Yoho said, to which Ocasio-Cortez responded by telling him he was being "rude."

Yoho, joined by Rep. Roger Williams of Texas, then descended the steps as Ocasio-Cortez continued into the building. The Hill reports he then said "F—ing b—," to no one in particular.

Though Williams told The Hill he was paying no mind to the exchange, Ocasio-Cortez called him out on Twitter on Tuesday for also yelling at her about "throwing urine."

"That kind of confrontation hasn't ever happened to me — ever," Ocasio-Cortez told The Hill about the encounter. "I've never had that kind of abrupt, disgusting kind of disrespect levied at me."

In another tweet on Tuesday, she said, "I never spoke to Rep. Yoho before he decided to accost me on the steps of the nation's Capitol yesterday. Believe it or not, I usually get along fine w/ my GOP colleagues. We know how to check our legislative sparring at the committee door. But hey, 'b*tches' get stuff done."

When asked about crime and unemployment in a conversation with The Hill earlier this month, Ocasio-Cortez said, "Why is this uptick in crime happening? Well, let's think about it. Do we think this has to do with the fact that there's record unemployment in the United States right now? Maybe this has to do with the fact that people aren't paying their rent and are scared to pay their rent… They're put in a position where they feel like they either need to shoplift some bread or go hungry that night."

After facing criticism over her statements, Ocasio-Cortez tweeted, "Republicans are all upset that I'm connecting the dots between poverty and crime. I know most of them haven't experienced or seen these issues first hand, but I have. This may be hard for them to admit, but poverty and crime are highly linked, both violent & nonviolent alike." 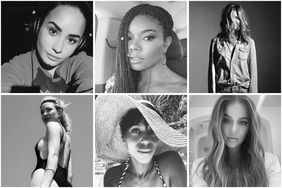 Who Is the Black-and-White Photo Challenge Actually For?