Birthday boy Alexander Wang should feel very proud of all he's accomplished in his short lifetime. Today, the esteemed fashion designer turns 32 and, after just 10 years in industry, he's already managed to cement his spot among fashion's very best names.

Since coming to prominence in the fashion world after gaining attention for his 2005 unisex cashmere sweater line, Wang worked his way up the fashion ladder. In 2007, he debuted his first-ever eponymous women’s ready-to-wear collection on the New York catwalk and in 2008, his talent was more formally recognized when he received the CFDA/Vogue Fashion Fund, an honor accompanied by a $20,000 award to expand one's business. And, expand it, he did.

Today, he dresses celebs, such as Zoë Kravitz and Rihanna, for all types of appearances, including red carpet events. In fact, during his three-year stint as creative director for Balenciaga, Wang was credited with putting the brand on the red carpet in all sorts of places it hadn't been seen before. Talk about an innovator at such a young age. Congratulations and happy birthday, Alexander! 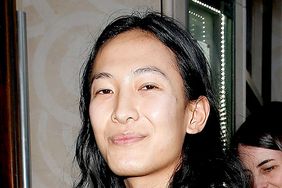