Adele had us seeing double Tuesday night as she invited her look-alike on stage at her concert at the Genting Arena in Birmingham, England. The two said 'hello' and sent the internet into a spin as they posed for a selfie together.

Adele's lookalike Emily Bamforth was plucked from the crowd after a tweet from her fiancé Tom Winkler brought their likeness to the singer's attention.

"@Adele every one thinks my girlfriend is you! She's been asked 10 times now! Only one the 4th row!" He wrote on Twitter.

And once the two had shared their moment in the limelight he returned to the platform to post their uncanny snap, writing: "@Adele made my fiancé's day, month, year! Thank you for the massive amount of brownie points!"

It's not the first time Adele has spread some love to couples in the audience on her latest arena tour. At the O2 in London earlier this month she stopped midway through singing Make You Feel My Love to welcome a newly engaged couple on stage.

We can't wait to see more of Adele's fan interactions during her Live 2016 tour. 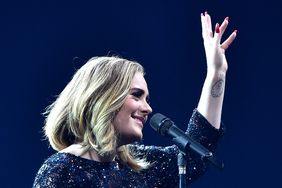