5 Of Our Favorite Things About The Sound of Music Live Tonight!

From winning American Idol in 2005 to becoming one of the biggest country music stars, Carrie Underwood has certainly become a powerhouse in music—and now, she is adding live musical theater to her ever-expanding resume, playing the role of Maria in The Sound of Music. For the past two months, the cast has been tirelessly rehearsing to perfect this three hours of a new imagining of the iconic musical and beloved 1965 movie. The Sound of Music will be a televised live event—unlike anything else—that demands an immaculate vocal performance from Underwood, and joining her for the night is True Blood's Stephen Moyer who is stepping into the role of Captain Von Trapp. Here are a few of our favorite things to get you ready for the show tonight:

1. The Music Although the event will be sung live, to get a sneak peak of the music go to iTunes to download the companion soundtrack. The soundtrack includes musical numbers that only appear in the stage version and not the iconic film—so there are sure to be a few surprises.

2. The CostumesThe cast will be in front of ten cameras tonight, using the commercial breaks for costume changes. The costumes will be updated classics, but later on December 21 Profiles in History will auction off 14 costumes from the original film.

3. Broadway VeteransLaura Benanti, who will play Elsa Schrader (aka Fraulein Schrader), is no stranger to the stage as she won a Tony Award in 2008 for her role in the revival of "Gypsy." But, also make sure not to miss 5 time Tony winner Audra McDonald (from Private Practice) who will play Mother Abbess and Smash's Christian Borle as Max Detweiler.

4. Fresh FacesNewbies Michael Campayno and Ariane Rinehart have the mighty task of playing the star crossed young lovers Rolf and Liesl. Both currently college drama students, these two are the next ones to watch!

5. Julie's BlessingJulie Andrew's take on Maria in the iconic movie is remembered well—as is Mary Martin's original Broadway production in 1959—and Julie was sure to wish Carrie well as she's told various reporters, "It's a lovely piece, and I do hope it works for Carrie, because she's lovely and I'm a fan. I wish her well."

To get a sneak peak of the music go to iTunes to download the soundtrack and make sure to tune into The Sound of Music live on NBC tonight at 8/7c. 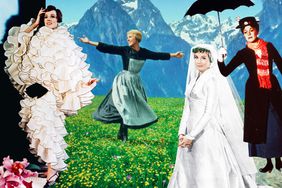