The HBO vampire drama may be coming to an end this summer, but there is one werewolf we are not ready to say good-bye to. So in honor of the first episode of the final season of True Blood this weekend, we picked our favorite shirtless photos of Joe Manganiello from his Instagram feed, then we added some insightful quotes from the man himself (so you wouldn't think we're just interested in his six-pack). "I don’t think there’s any such thing as male objectification..."

"You get cast as a werewolf or a shapeshifter on True Blood you pretty much know you are going to get naked." "I love walking around and grabbing coffee and sitting in a park and people watching..." "My wolf is named Thunder. He is a golden coloured Timber wolf, he's huge and got this crazy yellow eyes. He is the grouchiest wolf and growls at all the other wolves." "If anyone were to mistreat Sookie in any way, the beast inside of Alcide would be unleashed." "I wanted the character to be ripped. I didn't want an extra ounce of fat on me. I wanted to be the animal." "Alcide is this just and moral man, and he sees some things going on that he can't ignore, and so that kind of throws him into the action." "He's a big, sensitive bunny rabbit inside of this wolf monster clothing... a sheep in wolf's clothing!" "I love doing physical stuff. I used to box, and I used to train as a boxer, and I've done countless action fight sequences, so I really do enjoy getting into the mix there, and they were really cool about letting me do that." "Werewolves are a really rough bunch, so wherever there is a group of werewolves, there is always going to be a fight." "There's a fondness and a bond that grows between Alcide and Sookie. Sookie's spunk brings him out of his shell, and I think he recognizes that he really likes that." "[Eating a lot of meat] definitely helped get me into character." "Then, I ended up the shirtless werewolf."

We knew you would make it to the end. As a reward, here is a link to our Hottest Celebrity Abs gallery. 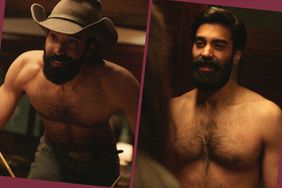 Oh, Nothing, Just a Hot Guy from Some Netflix Shows You Forgot Also Starred in 'Degrassi'