12 Times Celebrities Forgot It Was Winter In NYC

They say you need thick skin to survive Hollywood. As it turns out, you literally need thick skin. Despite snow banks, icy sidewalks, white outs, and subzero temps, we've seen celebrities step out in clothing (or, lack of) that would have the most warm-blooded of us reel back in horror. One thing's for sure: They're a resilient bunch.

We rounded up 12 stars who have been snapped out and about braving New York City's brutal chill in the past two months without proper cold-weather gear—things like tights, boots, or, in some cases, coats. Clearly, they've forgotten it's winter.

How she did it, we may never know, but Russell dodged frostbite as she attempted to not slip on ice in red strappy Alaia sandals.

Teigen gave a wave, despite the snow, in a white knit crop top and matching skirt by Elizabeth and James, and metallic sandals.

Winter be damned—Kloss toughed it out in a sleeveless green dress, sans coat.

The temperature was 17 degrees Fahrenheit at the time this picture was taken. Let that sink in.

This Is Why the Turtleneck Should Be Your Next Purchase

She may have looked red-hot in Ralph Lauren Black Label outside Late Show with David Letterman, but we can only see Williams's bare arms and legs.

Parker exposed her ankles as she stepped over a patch of ice in cropped khakis and summer-ready peep-toe sandals.

Oh the cold shoulder! The musician barely covered up as as she exited the Adidas Originals x Kanye West show at NYFW in an off-the-shoulder Julia Seemann design.

The model, clad in top-to-toe Tory Burch, is on fire at the moment, which clearly means she doesn't need pants or tights or closed-toe shoes.

Kardashian worked her curves in a second-skin pink latex Atsuko Kudo and PVC sandals to achieve a nearly nude look. She almost succeeded.

Queen Bey wasn't at all practical in her look, but at least she looked good (as always). She wore an embellished zipper-front Harbison crop top and matching skirt with Alaia sandals.

The model was in danger of hypothermia outside the amfAR New York Gala in nothing but a sexy one-shoulder Romona Keveza dress and Louboutins.

At least Fanning had the foresight to shrug on her butterfly-print jacquard Valentino blazer, right? 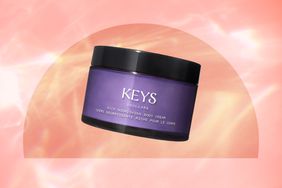